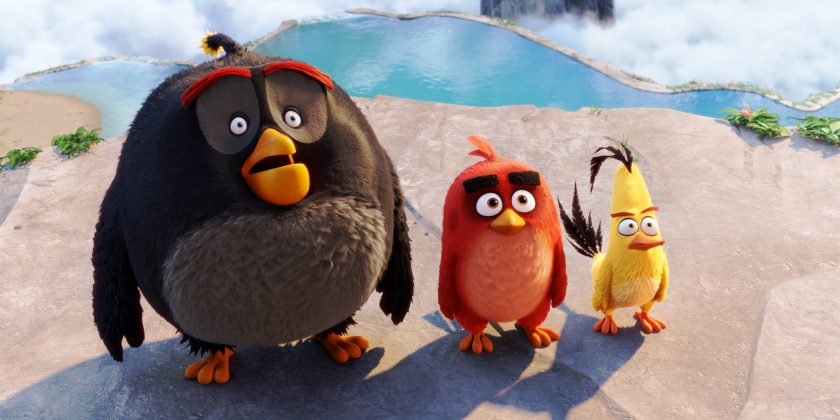 The film industry is at a peak with animation at the moment to both adults with films such as ‘Anomalisa’ and kids such as ‘Zootopia’ and ‘Inside Out’ which have enough references to entertain the adult viewer today. ‘The Angry Birds Movie’ is a feature-length adaptation of the most downloaded smartphone game of all time and with all of the spin-off’s and sequels that the original game has found, making it into a film was always the next logical step to cash in on their success and hopefully expand into a new media platform. Whilst this would suggest pure greed from studio executives and Rovio, although I wasn’t overly keen on it, 2014’s ‘The Lego Movie’ proved that in capable hands, adapting a film from a game doesn’t always have to result in a bad film and the film has a great heart to it. The directors of this film, Clay Katis and Fergal Reilly make their debut here, Reilly previously a storyboard artist and Katis an animator for Disney so whilst they may lack experience, the film should hopefully look stunning in terms of the animation.

‘The Angry Birds Movie’ is a cliché-ridden cash grab that is virtually laugh-free. The script is particularly stodgy in places with the first act being especially badly written. If the film gets a sequel which I strongly suspect it will do, it desperately needs a new screenwriter. However, what saves the film is there are a couple of very good voice performances which in turn makes some of the characters very engaging and I found that I did care for some of the characters despite the film not hitting it with its ill-attempts at humour. Additionally, the animation is as expected, first-rate and the world’s that have been created are stunning.

The screenplay by Jon Vitti, who has written some great episodes of ‘The Simpsons’ in the past, is extremely problematic. The jokes are uninspired and at times, quite bizarre and a little inappropriate for a film with a U rating. I chuckled twice. The story isn’t particularly inspired but it does manage to incorporate all of the aspects that gamers have come to love in the game. The first act in particular is really badly written and there is a sequence where it seems as if the filmmakers try to get protagonist, Red, angry and as a viewer, it made me angry having to experience this. Although cliché-ridden and borrowing from many other superior films, the film does manage to improve, largely due to its engaging characters.

And that is where the film manages to partly redeem itself. Jason Sudeikis as Red is absolutely fantastic and his character is well-developed and I cared for the outcome of his character. Danny McBride as Bomb is also great as is Bill Hader as the villain, Leonard, who is very charismatic and a worthy antagonist. However despite these great characters, there are also some real duds such as Josh Gad’s Chuck and Maya Rudolph’s Matilda who is downright annoying. Poor Sean Penn really draws the short straw and he is merely in the film to grunt here and there.

The animation is excellent here and the world-building really is stunning – both islands created for the Angry Birds and Bad Piggies are vividly realised and there is a very careful attention to detail. It would have really elevated the film if there would have been some time to have a closer looks at the world and this attention to detail be capitalised on.

Ultimately, ‘The Angry Birds Movie’ is sadly a cash grab and the jokes consistently do not land with the audience. The script is a big issue and is something that if a sequel were to go ahead, requires drastic improvements. However, the film is never ‘bad’ – it’s just very uninspiring and although being very formulaic, on the strength of its engaging characters it is increasingly entertaining as the film progresses. It’s a shame that the film isn’t any better but the fact that the film badly botches its attempts at humour is near-unforgivable with the talent involved.

One thought on “The Angry Birds Movie (Review)”