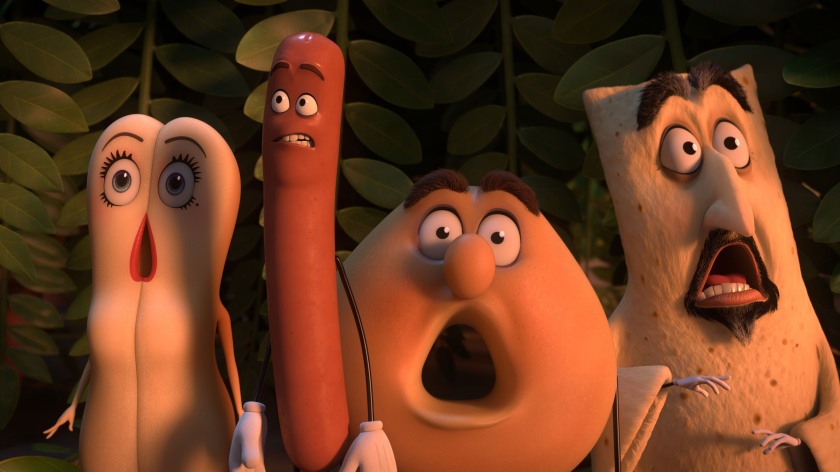 ‘Sausage Party’ is an adult-animated comedy produced by and starring Seth Rogen and a whole host of his usual collaborators including Kristen Wiig, Jonah Hill and Edward Norton to name a few and looks set to be another film to add to the wealth of stellar animated features that have been released this year. Ever since the first trailer was released, it has looked very promising and original –  it is essentially a parody of a Pixar animation film with added strong language and sex and drugs to push the film up to the 15  boundary. The film follows the journey of Frank, a sausage, voiced by Rogen who goes on a journey trying to discover what the meaning of life is and tries to stop his friends from going to ‘The Great Beyond’ where they believe that humans will care for them but this is far from the truth. The whole idea of food being anthropomorphic is not too dissimilar from Pixar’s ‘Toy Story’ for example but how this film stands out is its appeal to an adult audience by adding in adult themes.

‘Sausage Party’ has always had an excellent premise and the trailers have indicated that this has the potential to be a very, very funny and wild affair.  The actual film itself is very different to the one that was marketed. It’s still absurdly funny in places but surprisingly poses some intelligent, philosophical ideas and has some emotional heft. However it’s a wildly uneven film that doesn’t feel like it’s quite gelled together (its pacing is all over the place) and it is rather silly in places, as one would expect. It cannot be stressed enough that this is not a film that children could watch at all – this is adults only and it’s cemented itself right at the upper limit of what constitutes a 15 rating. Seriously do not take your kids for this one!

The film has multiple standout scenes that are wildly funny especially in the film’s final act that this film will definitely be remembered for – I don’t want to give too many spoilers but they do leave out some very funny scenes out of the trailers. It’s also rather intelligent – Rogen’s characterisations of different characters in food form is both very clever but also hilarious and there are many questions posed regarding religion and philosophical ideas that mean the film isn’t just a straight-up comedy and actually has something to say. However, Rogen’s answers to these questions are rather controversial and this film will alienate and offend certain audiences.

But it’s the pacing that ultimately mars the film – it’s just all over the place until it manages to click in the pace for the final third. The first two thirds though are all over the place and the film ranges from being extremely funny to rather long conversations on life and religion. Now whilst these aspects are separately suitable, the film is very haphazardly edited together and whilst you would expect the fact that the film is only 89 minutes, a relatively short run time where you would expect the film is fairly short, sharp and to the point, the film can surprisingly be a bit of a slog in places. This shouldn’t be the case and this is down to the fact that the film just sometimes does not come together.

Aside from all the film’s controversy and pacing issues, the voice cast here are absolutely stunning with the standouts being Seth Rogen, Bill Hader and Edward Norton with Hader being the standout of them all. Hader voices multiple characters in the film and I didn’t recognise him until seeing his name in the credits which is testament to his voice work – he is so talented and not just in this film, he has lent his voice to many different characters in different films over the past couple of years and this film continues this trend. Rogen and Norton are also great here, as expected and this is a totally different character for Norton than what he has played before, here playing a Jewish Woody Allen-esque bagel. Although the film doesn’t have that much character development, the characters do bear some emotional connection with the audience and it is heartbreaking to see how the characters are treated once they leave the store and borrows many codes and conventions from Pixar’s ‘Toy Story’ for example which the film riffs.

The music in this film by Alan Menken and Christopher Lennertz is also rather fitting and the musical number that the food start their day singing across the store is well-scripted and orchestrated and has laughs-galore.

‘Sausage Party’ isn’t exactly the film that was promised in the film’s marketing as it is very intelligent in places and poses some interesting ideas and questions surrounding the themes of religion and life for example but the film suffers in its pacing. It’s disjointed and narratively a little jumbled but luckily a strong ending manage to save the film and pick it up on its feet. This film is perhaps most important in proving that there is an audience for an adult animated film and whilst perhaps the film may not be remembered as well for what it is, it has opened new possibilities in cinema which is very exciting. Still, ‘Sausage Party’ is an interesting film and surprises with its intelligence but it’s just not funny enough and haphazardly paced.