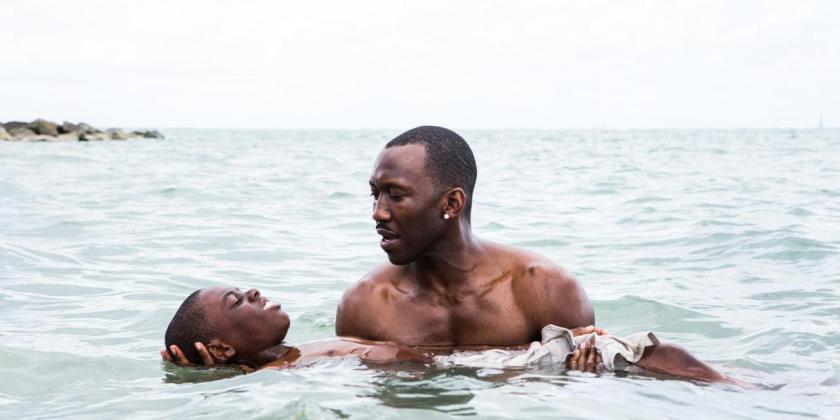 It seems as if ‘Moonlight’ suddenly came out of nowhere late last year and suddenly dominated all Awards talk. It presents three stages in the life of Chiron who as a child who goes by the name of ‘Little’, as a teenager and as an adult nicknamed ‘Black’ and his struggle with his sexuality and identity. This is director Barry Jenkins’ second directorial effort after ‘Medicine for Melancholy’ in 2008 and he also wrote this film, adapting this narrative from an unpublished play, ‘In Moonlight Black Boys Look Blue’. The film recieved lots of Awards buzz and ultimately ended up winning the coveted Best Picture Oscar as well as for Jenkins’ screenplay and the supporting performance by Mahershala Ali. This has become the first LGBT film in history to win this award and Ali, the first Muslim. And rightly, it tells an important story that hasn’t been portrayed enough in film.

‘Moonlight’ makes for quite a mixed watch and starts off well enough in its first two segments only to undo itself in its third. It tackles a lot of interesting themes, particularly that of identity which is key to how Chiron develops as a character. I couldn’t really connect with the characters in the third act and found the film quite alienating. That said, the film is not an easy watch and this is a film that warrants rewatching so the rating of this film has the potential of increasing. Aside from my issues with the film, it features some great performances, a superb score  and some interesting cinematography and the film can only be admired for what it is trying to do even if Jenkins doesn’t quite have the experience to fully execute his vision.

The film features some great performances by all the cast, but particularly the three iterations of Chiron, Janelle Monae and of course, Mahershala Ali. Trevante Rhodes, Ashton Sanders and Alex Hibbert, who play the three Chiron’s are all superb and will hopefully all go far in the film industry. For my money, Sanders probably has the meatiest part of the film and there are a couple of sensational sequences with him where everything gets too much for him and he fights back which was mesmersing on the screen to behold. Alex Hibbert’s performance as the youngest iteration is imperative in order for the audience to connect with the character and there are a couple of sequences where he really gets to display his acting chops and whilst Trevante Rhodes in the film’s final section doesn’t fare quite as well, offers a subdued and nuanced performance. Of course, Mahershala Ali is as expected great and deserved his Oscar despite only being in the film in the first section but his absence is sorely felt particularly in the latter half of the film where it begins to fall apart. Janelle Monáe is just as strong as Ali here and makes the most of several opportunities in the film to really display her natural flair as an actress with some heartfelt sequences with Chiron. She also gives a very strong performance in ‘Hidden Figures‘ and equally stands out. Monáe should have been the actress here to get recognition for her performance, not Naomie Harris who I felt a little over-the-top.

I really admire the respect that Jenkins has for these characters and felt that his screenplay was very cine-literate and has plenty of room left for thought. It was very interesting to note comparisons between the first and last section of the film and seeing how these characters come full-circle, almost in a Shakespearan-like way. It is a shame that the final act seems a little out of place in parts and doesn’t gel as well with the film as its first two sections do and I hope, with a little more experience, Jenkins will be able to deliver that gut-punch needed to better round off his films.

Nicholas Britell’s score wound me up in ‘The Big Short‘ last year and it has been quite annoying that he is getting more and more work as a composer however I owe the man an apology as his score for ‘Moonlight’ is simply superb. It is memorable, melodic and perfectly conveys the emotions of what is being portrayed on-screen and acts as the glue that splices together these three stories. It deservedly earnt its Oscar nomination. The cinematography by James Laxton is a little frenetic at times but he does use some very interesting shots in some parts of the film and his lighting is particularly metaphorical. It is graceful when the film is given a chance to breathe but equally chaotic when chaos ensues for the characters. It’s an interesting piece of work.

‘Moonlight’ is ultimately an ambitious film that tackles some heady themes and the concept of it is outstanding. Its first two thirds are well-judged and treated with a lot of respect by Jenkins and I really felt for the characters at times. It’s a shame that it can’t quite sustain its grip in its final section which tonally feels a little off and meanders a little into a bit of a mess. However, I appreciate that this film will need rewatching and there is potential for the grading of this film to increase. On first watch, I found the bulk of the first two thirds mesmerising which was bolstered by the strong performances, cinematography and score only to be a little underwhelmed and short-changed in the final act. But it’s a good effort by Jenkins and his cast and crew who attempt and for some part, manage to succeed in their plight to bringing this compelling narrative to the big screen.