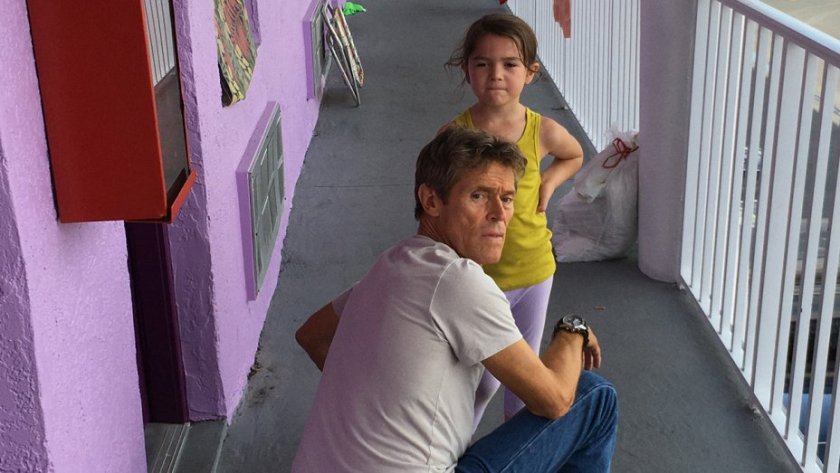 After universally impressing with Tangerine, a film shot on an iPhone 5S, director Sean Baker is back with another insight into society, this time in the deprived areas surrounding Disney World in Florida, hence the film’s title derision from the working name for Walt Disney’s project. But where the film also takes place is in effect, not unlike American “project” communities. Although Baker’s film is now shot on more conventional film, The Florida Project is an equally unconventional, searing look at society.

We follow six year old Moonee and her twenty two year old mother, Halley, both brilliantly played by Brooklynn Prince and Bria Vinaite, who are equally stars in the making. They are both ‘residents’ at The Magic Castle motel. Although the motel’s name might connote expectations of happiness and fantasy, these connotations can be discarded as the majority of the people who reside there are in effect tenants, only to legally work, they have to move themselves and their belongings out for a day intermittently. Moonee is a highly inquisitive girl, whose playful character often gets the better of her as she pranks others with her friends from these residences. Her heart is in the right place, however, and she only ever wants the best for everyone. Her mother, Halley, is struggling both emotionally and with money and the film follows how she is becoming increasingly unhinged and how this is putting strain on her daughter until a crescendo of tension in the film’s finale. But she still clearly has a motherly love for her daughter and wants the best for her, despite knowing how best to raise her child. Willem Dafoe puts in a career-best performance as Bobby Hicks, the manager of this particular hotel, who effectively acts as a father figure to the children. He comes across to them as stern, even bordering on unfriendly at times but he so clearly wants what is best for his tenants welfare.

At times, The Florida Project is a fascinating character study and explores the juxtaposition of adulthoood and childhood and its climax is particularly moving. But the film panders along more than enough to get there, it is definitely a good twenty minutes too long. That said, it is a film that warrants repeat viewings as it leaves a lot of questions for its audience, something that more casual viewers may perhaps feel rather underwhelmed. Although deeply flawed, Baker’s film is certainly a story worth watching unfold.

One thought on “The Florida Project (Review)”