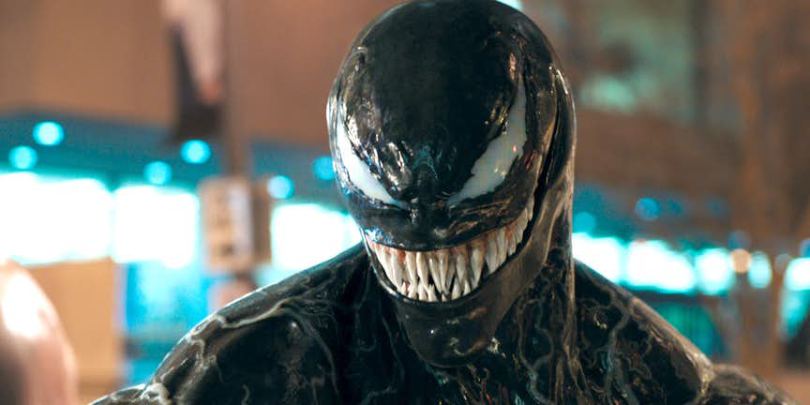 With the superhero genre continuing to dominate at the multiplex, Venom is a strange beast. On the one hand, it’s a film that doesn’t really seem to belong and it feels like it’s straight from the 1990’s with its primitive script, corny character relationships and incoherent narrative with a pinch of the early 2000’s with its shaky-cam action sequences. On the other hand, despite this film being awful, it peculiarly does seem to perform an alternative service for the genre, much in the same way that Logan had influences with the Western, Venom tackles elements of the black comedy, for better or worse.

Venom is an adaptation of the much-loved Spider-Man villain and fans took offence with his shoe-horned inclusion in Sam Raimi’s maligned Spider-Man 3. Tom Hardy plays the journalist-turned-supervillain, Eddie Brock, in this adaptation by Zombieland director Ruben Fleischer. At the start of the film, a probe belonging to the bio-engineering company, the Life Foundation, discovers symbiotic lifeforms on a comet. These symbiotes are bought back to Earth and Carlton Drake, the evil megalomaniac who owns the Life Foundation, uses the symbiotes in near-instantaneous human trials to try and achieve symbiosis with the subjects. As one would expect, Brock gets infected by one of them and chaos ensues.

Unfortunately, Fleischer makes every mistake possible in the rulebook and at least until Brock gets infected with the symbiote, the film is frequently painful to watch. The script is so obvious and cliched and story beats so haphazardly and embarassingly put together. Brock’s girlfriend, Anne Weying, played by the always brilliant Michelle Williams, is a particular sore point as Brock betrays her for the sake of journalism very early in the film and then has the cheek to hang around her trying to win her back. Tom Hardy’s performance is cringeworthy and his character is an annoying loser and an embarassment of a low point of an entry into the career of journalism. Furthermore, the action sequences are ostensibly terrible, resorting to shaky-cam and there is a complete lack of any choreography or movement, making them also incoherent despite them being conventional.

When Venom enters the film, the film begins to unknowingly start to create an interesting dynamic between the symbiote and Brock, with some rather juvenile but interesting humour. Hardy does better in these scenes and the back-and-forth fares well. Don’t get me wrong, the film is still awful and for every good idea, there are multiple mis-steps but there’s something shamefully satisfying watching this trainwreck of a film.

Other points worthy of note in the film include a genius post-credit scene that excite the prospect of a sequel and Fleischer does a sound job of showcasing the city of San Francisco, with little details peppered into the film here and there.

Venom is ultimately a strange concoction. I can’t say I liked the film much and for a lot of it, it is embarassing to sit through. Yet, with a genius post-credit scene that hints at a better sequel and the result of Tom Hardy finally coming to terms with his character towards the end of the film, I would strangely look forward to a sequel.