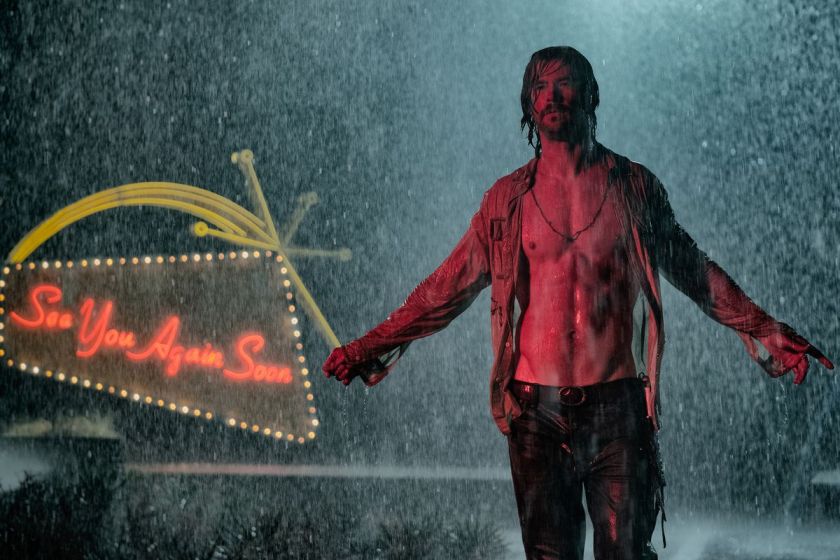 Bad Times At The El Royale, writer-director Drew Goddard’s sophomore directorial effort after Cabin In The Woods, is an interesting piece of work. Departing from the horror genre of his debut feature, here Goddard explores neo-noir. Rather originally, the film is set at the El Royale hotel, an establishment that sits quite literally between the California and Nevada border where guests can choose which state to stay in. It is revealed that ten years prior to the events in the film, a bag of money was buried under the floorboards of one of the rooms and the film follows a set of strangers who each have their own secret intentions, that arrive at the hotel.

Bad Times At The El Royale is gripping when Goddard has full command of the material and there are some mostly satisfying twists that are unearthed throughout the course of the film. Like Cabin In The Woods, Goddard again deconstructs genre through the film’s setting, characters and its moody, pulp atmosphere. There are also some great performances from the cast, with Jeff Bridges’ priest, Dakota Johnson’s femme fatale, Jon Hamm’s hoover salesman and Cynthia Erivo’s singer all rich characterisations. Lewis Pullman is particularly good as the hotel concierge, who also has some secrets up his sleeve and Chris Hemsworth shows up in the film’s final act as a Charles Manson-esque cult leader. The film is also frequently visually arresting to look at, Seamus McGarvey again conjuring some striking images and impresses particularly in one sequence with a tracking shot.

However, what undoes Bad Times At The Royale is its self-indulgence and portentousness. The film has a rather langourous 141 minute run time and whilst the film is often gripping, when it isn’t, it’s a chore to get through. Goddard’s script only has some moments of brilliance, and memorable lines, particularly Bridges’ quip, “Shit happens. Get the whiskey!”. Many have compared this film to Quentin Tarantino’s Pulp Fiction, another filmmaker who has a sharp voice in his scripts. Unfortunately, this lacks the overall sustained wit from Tarantino and doesn’t have anywhere near the same amount of energy.

Overall, Bad Times At The El Royale is a frustrating film in that it is close to being excellent, but Goddard’s script and indulgent run time seriously dent the film’s pacing. The film is best in the first third when it is establishing the setting and characters. It has perhaps the best opening scene of the year which properly sets the tone of the film. But then, as it begins to delve deeper into its murky filmic world, the pacing problems begin to develop, as Goddard heavy-handedly draws out conversations and introduces too many sub-plots and themes. There’s certainly a lot to like in Bad Times At The El Royale, but it falls short of being the perfect genre deconstruction piece it aspires to be.

One thought on “Bad Times At The El Royale (Review)”