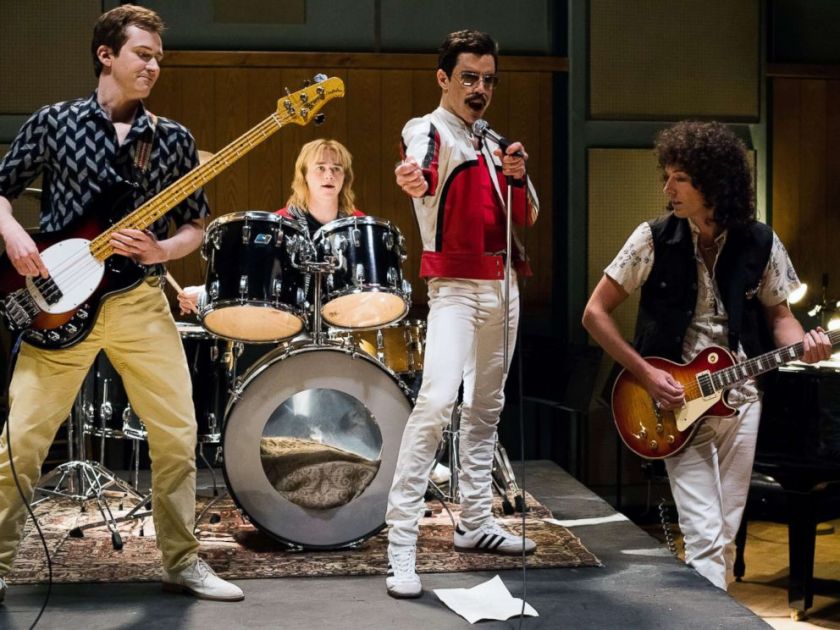 In what has been a tumultous journey to the big screen, it’s rather surreal that that the Queen biopic, Bohemian Rhapsody, has finally made it to release. The film was originally greenlit in 2010 with Sacha Baron Cohen as Freddie Mercury, the actor didn’t see eye to eye with both the crew and Brian May and Roger Taylor, two of the band members who have had an important input into the film. The project was in lingo due to problems cracking the script and finding a replacement for Cohen until Rami Malek was cast in 2016. Then, there were setbacks with Eddie The Eagle director Dexter Fletcher, dropping out. Bryan Singer replaced him and it is Singer that has the directing credit here, but he was fired after a combination of not getting on with Malek and not showing up and then Dexter Fletcher came back to finish the film.

Although these all represent bad omens for the film, Bohemian Rhapsody is a well-crafted biopic that I was emotionally invested in for much of its running time. Rami Malek’s performance as Mercury is sensational and he completely inhabits the role, through his appearance, speech and mannerisms, capturing the late rock icon to a tee. The performances across the board are uniformly strong and Mike Myers is particularly good in a small role as a slimy EMI executive. Visually, the film looks good, for the most part Bryan Singer-regular, Newton Thomas Sigel’s cinematography is sound and the hair/make up and costuming are convincing, with the exception of Malek’s fake buckteeth at the beginning of the film which are a bit jarring. The film is sensible in its scope in terms of the events it goes through in the space of the 134 minute running time and achieves all the major beats in the band’s history, ending in Queen’s Live Aid performance and Mercury’s AIDS diagnosis. As a Queen fan, I’d have been more than happy to watch more if the film was longer and went into further detail but one must realise this film has to appeal on all levels.

Considering that the film has multiple directors in its production, the film feels like one vision and it’s a rather seamless experience, unlike films such as Justice League, which feel like a frankenstein product where distinct visions pull the film in different directions. That said, this film does feel more like a Dexter Fletcher creation than a Bryan Singer one, particularly in its humour and sharp script, which is a relief as Singer seemed like a strange choice when one considers his filmography.

Bohemian Rhapsody is a rather sanitised affair though. Considering this is a film about a band that took risks, the film could have interrogated some of the events and the band members a little more perceptively. Other than Mercury, the rest of the band are portrayed pretty much as perfect individuals, which is not surprising that May and Taylor had a big influence and whilst Gwyilym Lee, Ben Hardy and Joe Mazzello are all very good in the roles, they don’t have all that much to do. This is much more a Freddie Mercury study, but even then the film doesn’t delve too deeply into his life, only offering subtle hints at his sexuality and his personal life. I think this decision has been made more out of respect for him and to preserve his legacy, but instead perhaps there could have been a greater emphasis on the band dynamic and this would have enabled all of the band members greater development. Obviously, it’s a tricky juggling act trying to service all four band members and the film does a good enough job in the time frame, choosing not to get under the surface too much.

Unlike many reviews, I found the major mis-step with the film to be the ending Live Aid concert, which goes on for a good 15/20 minutes. Newton Thomas Sigel’s cinematography in this sequence is rather too flashy for its own good, with too many aerial shots and it looks too digitised and the whole sequence almost borders on being a bit naff and karaoke-like. As good as Malek and the cast are as Queen, they’re not the real thing when it comes to this sequence. It also felt more like a concious effort to get any remaining important Queen songs that hadn’t yet featured in the film into it.

Flaws aside, I was surprised by how emotionally invested I ended up being in Bohemian Rhapsody and it does overall, more than manage to capture the overarching essence of the band and succeeds in how they interact, even if the film does end up playing things safe. It is a respectful account of the band and if you’re not already a fan of them, will more than likely provide some inspiration to discover or re-discover what is one of the best rock bands in living memory. Rami Malek, in particular, is jaw-droppingly good as Mercury and I hope he gets some recognition for his performance in the upcoming Awards season. Bohemian Rhapsody is certainly well worth watching and should appeal to both the avid Queen fan or a newcomer as it works very well as a film in its own right.