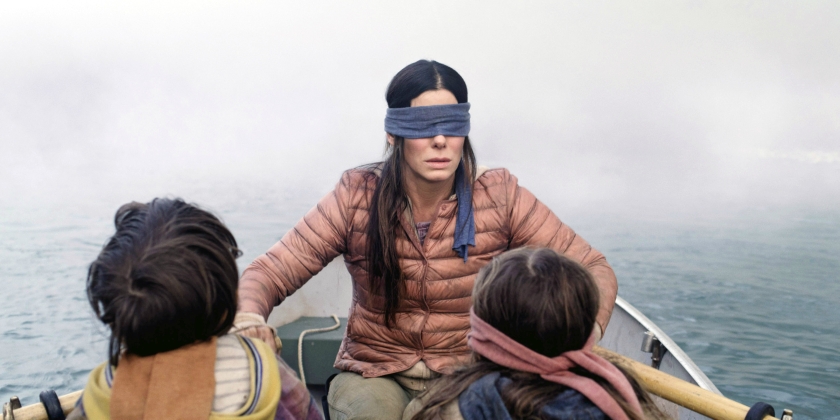 Positioned as a cross between A Quiet Place and The Happening, director Susanne Bier’s post-apocalyptic thriller Bird Box lacks originality but is very entertaining. Essentially A Quiet Place with sight substituted for sound, this film follows Sandra Bullock’s Mallory, an expectant mother who manages to make it to safety when people start commiting mass suicide after being infected by an unknown entity. This story is told in flashback to Mallory escorting two children onto a boat down a river to get to safety wearing blindfolds in the present and we learn how she got to this point.

The best thing going for Bird Box is its convincing performances by its strong cast. John Malkovich is the standout as a pessimistic, boozy homeowner who harbours some of the survivors whilst they figure out what to do next. Malkovich could play this role in his sleep and he is given many of the script’s best lines. Both Trevante Rhodes and Lil Rey Howery are also charismatic in supporting roles.

Technically, this film is very proficient and handsomely shot by Salvatore Totino. There are some good action sequences too and a section where some of the characters risk their lives to get groceries from the supermarket is particularly nail-biting. This tension is heightened by Trent Reznor and Atticus Ross’ subtly effective score.

Despite the film being entertaining, I’m unsure as to whether the decision to tell the story in a fragemented timeline is a good one. Some of the action sequences do feel a little stunted as we flick back-and-forth through the two different time periods. The fate of the characters is also obvious as we know what will eventually happen, which results in the film never being able to live up to its suspense potential. What perhaps would have been better would be to keep the first scene of Mallory’s river escapade and then tell the film in chronological order to come back to this moment, which still would have sustained a mystery element.

Bird Box is a solid film for Netflix and it’s a shame that the spectacle of this film can’t be beheld on the big screen for its memorable imagery. Regardless, despite being rather unoriginal, Bird Box partly makes up for in execution and entertainment but it is frustrating that the film cannot live up to its high-concept potential.