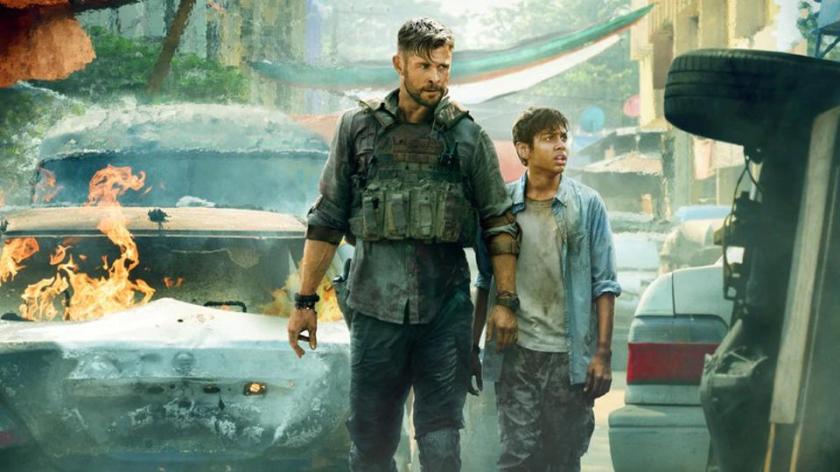 Produced by the Russo Brothers in their first project following Avengers: Infinity War and Endgame, Extraction is an action thriller for Netflix that follows Chris Hemsworth’s black-market mercenary who has to rescue a drug lord’s son, Ovi, who has been held captive by a rival drug lord. It quickly becomes apparent that the mission is impossible as Hemsworth’s mercenary faces an onslaught of Bangladeshi gang members, child warriors and corrupt police and soldiers. It is directed by Sam Hargrave in his directorial debut, best known for his collaborations with the Russo Brothers as their stunt co-ordinator.

On paper, Extraction‘s premise presents in pretty simple terms and the connotations of this type of action film are that of a brainless, simplistic and shallow shoot ’em up. And whilst that is what Extraction results in to a degree, it has slightly more emotional depth and some terrific action sequences.  The decision to go all-in on the violence (the film earns its 18-rating) works wonders for the film and the action sequences are constructed with the same type of frenetic and visual poetry as the John Wick franchise. There is a stunning extended sequence part-way through the film that is made to appear as though Newton Thomas Sigel’s cinematography is one-take and is berserk in how the camera follows the characters through various rooms and balconies inside and outside the streets of Dhaka.

On top of the well-executed action, Extraction introduces audiences to a strong cast of international talent. Randeep Hooda is terrific as former Special Forces Major who comes into contact with Hemsworth and has his own agenda for rescuing Ovi. Priyanshu Painyuli is also a personality to watch in future as he proves a particularly nasty and commanding villain.

Extraction more than fits the bill for switch-your-brain-off pandemic entertainment in its breathtaking action and relentless kills and is less shallow in its character development than one might expect.