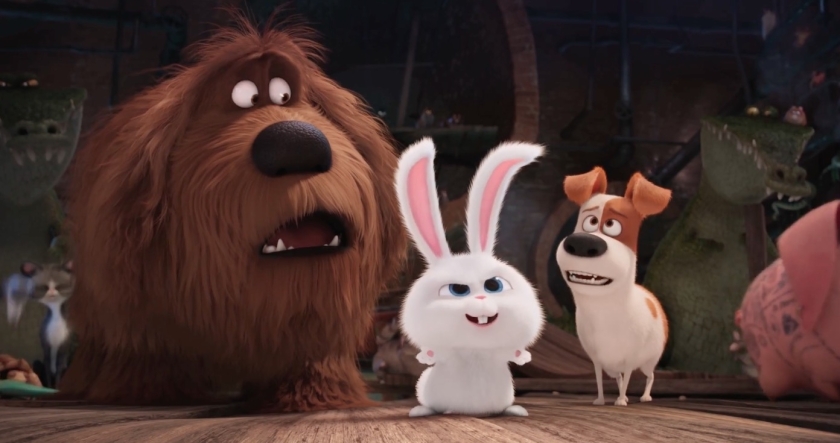 ‘The Secret Life of Pets’ is the latest offering by Illumination Entertainment, most famous for the ‘Despicable Me’ franchise with the rest of their films (‘Hop’ and ‘The Lorax’) receiving middling reviews. This film sets to buck that trend and further establish a foothold in the animation industry for this production company. As the title suggests, this film is an imagining of what pets get up to when their owners leave them alone and this story draws many obvious parallels with Disney Pixar’s ‘Toy Story’ only substituting toys for pets and these comparisons are going to be hard to shake off in the film’s reception. With such strong competition in the animation sector this year in the form of ‘Anomalisa’, ‘Zootropolis’ and ‘Finding Dory’, is there a place for ‘The Secret Life of Pets’ in a crowded year for it to shine?

‘The Secret Life of Pets’ is harmless fun that will appeal to both children and adults – it is almost always entertertaining and quite funny in places even if its pacing is uneven and the narrative plays it a little too safe and doesn’t particularly have any emotional arcs. It boasts a strong voice cast and the characters are well-developed with the standout being Kevin Hart’s villainous rabbit.Even though it is second-rate compared to Disney / Pixar’s standards and it’s not going to win any awards, this is simple, harmless entertainment – nothing more, nothing less.

What makes this film tick is undoubtedly the chemistry between the well-developed characters voiced by a strong cast. Louis C.K. as Max, a Jack Russell terrier who is the main protagonist is very charismatic and easily relatable and as an audience, we really feel his shock when he is forced to turn around his life to share his home with a new pet, Duke, voiced by Eric Stonestreet. Both actors have a wonderful chemistry together and although the narrative has its problems and of course, they undoubtedly befriend each other, their relationship still comes across as very natural and not coerced at all. Kevin Hart’s villain, a white rabbit is the standout here and although I have my reservations about Hart as an actor, here he is just downright excellent. I would be willing to even watch a spin-off if one were to be made that focussed on his character – he is that good! Steve Coogan and Albert Brooks also do a good job here in their small roles but are underused and the rest of the cast are solid, but not particularly memorable.

The story does play it a little safe here and it is rather conventional but the film still manages to be very entertaining. The ways in which these pets spend their days is very creative and the film is always well-intentioned. What the film lacks and why it cannot reach the lofty standards set by Disney and Pixar is it lacks a moral – there isn’t really any inspiration one can take from this film and implement this in real life. It lacks an emotional arc as well which all the best animation films have, the nearest being a sequence explaining the back story of Duke but this is glossed over too quickly for it to make a meaningful impact.

Visually, the animation is very convincing here in particular how New York has been imagined – it feels very life-like and there is a great attention to detail. Alexandre Desplat’s score is quite brash and choppy in places but there are some good sequences here where the score compliments the film very well – not one of his best scores but serviceable.

‘The Secret Life of Pets’ might not be one of the greatest animated films to grace our screens but it is a welcome retreat and despite its flaws, it is a well-intentioned film that is always entertaining. The characters are by far its biggest strength and they are all generally well-developed and this is complimented by the strong voice cast, most notably Kevin Hart’s evil rabbit steals the show. I suppose Illumination have achieved what they set out to do – start off another franchise which this does admirably well – no doubt we’ll be getting sequels to this and with a better story next time, I wouldn’t hesitate to watch these characters again.

One thought on “The Secret Life Of Pets (Review)”