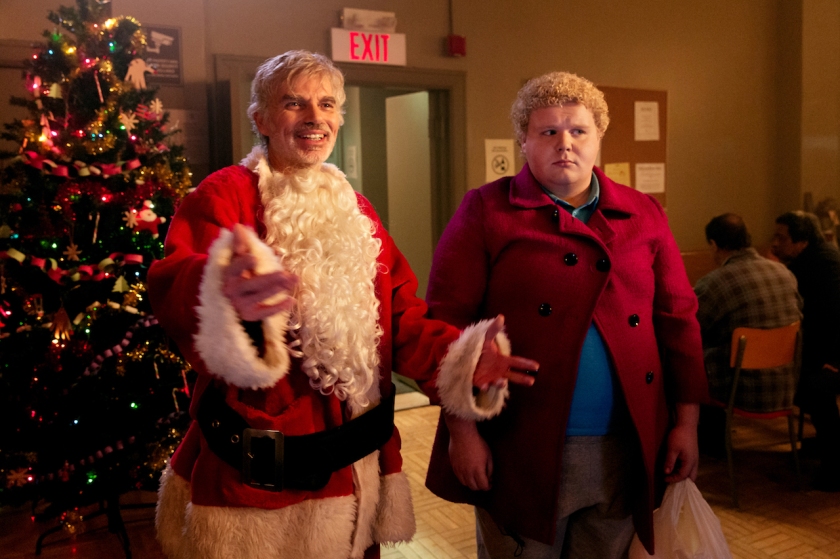 ‘Bad Santa’ was and continues to be a great Christmas film – it managed to subvert the genre by essentially being an Anti-Christmas film and was suitably raunchy and shocking for its time. It also featured a great central performance by Billy Bob Thornton as the titular character who really made the character his own and as an audience, for all the character’s flaws, one could empathise with him. ‘Bad Santa 2’ is the sequel no one ever really wanted 13 years later and is the latest comedy film of yesteryear to undergo this treatment. More often than not, these sequels have managed to tarnish the original – take this year’s ‘Zoolander 2’ for instance or ‘Dumb and Dumber To’ which was equally disappointing. The only one exception to this rule that comes to mind is ‘Anchorman 2’ which actually managed to be better than its original but Adam McKay, its director is one of the finest comedic directors around at the moment whereas ‘Bad Santa 2’ has Mark Waters in the director’s chair who has actually made some pretty good films such as ‘Freaky Friday’ but has had his fair share of duds too and for a film of this macabre, he doesn’t particularly scream out talent. So is ‘Bad Santa 2’ another bad comedy sequel to ruin its original or not?

It pains me to say that ‘Bad Santa 2′ is a lazy, puerile, mean-spirited sequel. It’s not funny at all save for a few one liners that got a faint chuckle out of me and the film actually really got on my nerves as the film progressed. On the narrative front, it’s pretty ropey but Billy Bob Thornton at least gives a good performance as the titular character but it’s just an awful shame he’s been equipped with such a bad script that pairs him up with hateful characters.  Alarm bells should have been ringing when news of Mark Waters’ hiring was announced – he is not suitable for this material and has spat upon the legacy of a film that I really like.

The performances in ‘Bad Santa 2’ are really lacking other than Billy Bob Thornton and Tony Cox who are both strong here and give exactly the same performance here that they did in the first film but they’re just saddled with an awful script. It’s such a shame to see Billy Bob Thornton’s career take another hit as he is such a versatile actor who is always the standout in everything he is in but he constantly is casted in twaddle but at least through his performance alone, I was still invested in his character. The casting of Kathy  Bates seemed like a great idea on paper and even in the trailers but in the film, she is an annoying and hateful character. I understand the film needs to be vulgar and mean-spirited which the first film managed to do to a tee but her character is just hateful. I couldn’t empathise with her character at all. Conversely, I don’t like Christina Hendricks as an actress and I found her character to be quite hateful as well as her decisions are baffling and stupid. Not stupid as in funny, just plain stupid.

‘Bad Santa 2’ is devoid of both story and laughs and has a total lack of heart and emotion. That’s why I loved the first film as although we witness the characters do some pretty awful things, we can see things from their perspective and can empathise with them. Here, it’s as if the screenwriters have spent 30 minutes crafting a series of events before they pick up their pay cheque and then left the film. The story is so poorly constructed and the ending in particular is rushed and sudden – there are many poor films where an ending has been able to rescue it but here it’s the inverse – as the film got closer and closer towards its end, I was seething and annoyed with how lazy and desperate the filmmakers seem to be here, I was genuinely beginning to think of ways of how this film could have ended that would have been better than this.

The score by Lyle Workman also compliments the film in its laziness and is completely unmemorable and Theo van de Sande’s cinematography detracts from the dirty, grimy look of the first film and the whole film has this made-for-television sheen about it.

Overall, ‘Bad Santa 2’ is extraordinarily lazy a real shame. It’s not quite as offensive as some other comedy sequels as it doesn’t try and turn the humour up to 11, instead ‘Bad Santa 2’ is just painfully flat and has no plot. I was seething out of the cinema and no one laughed during the performance apart from a couple of one-liners near the beginning of the film. It is Billy Bob Thornton’s performance that just about single-handedly manages to carry this film from a 1 to a 2 and  it’s such a shame to see his career take another hit which he doesn’t need. But this puerile, lazy film can be thrown away and burnt on the ever-increasing list of bad comedy sequels. ‘Bad Santa 2’ is not the Christmas treat that we deserved.