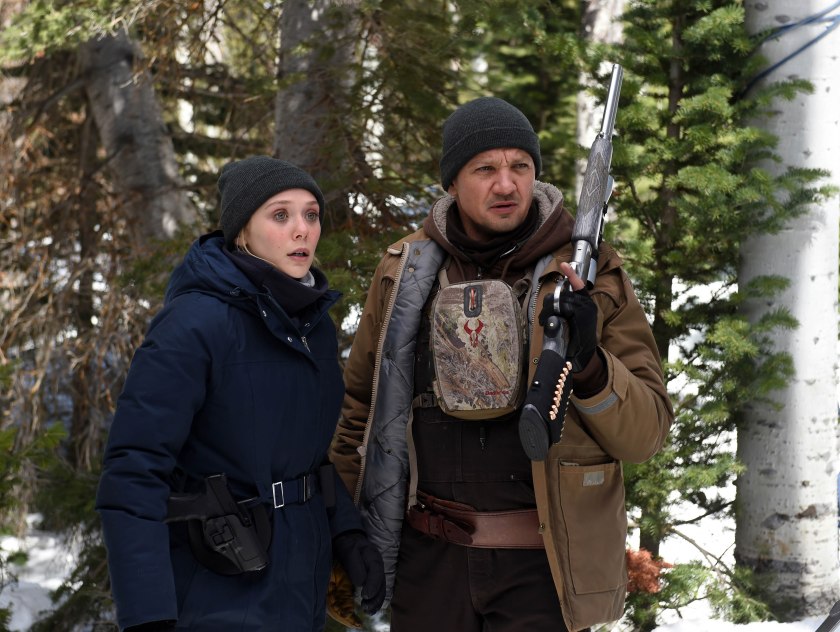 Set in Wyoming on the Wind River Indian Reservation, tracker Cory Lambert (Jeremy Renner) discovers the raped and murdered body of Natalie Hanson who has just turned 18 years old. She is barefoot, without proper Winter clothing and miles away from civilisation. FBI Agent Jane Banner (Elizabeth Olsen) is brought in to solve the case who enlists the help of Lambert for his tracking expertise and the local Police headed by its Chief, Ben (Graham Greene). Banner is clearly out of her depth in this chilling climate, a fish-out-of-water character whom the Tribal Police are critical of due to her gender and lack of experience. But Sheridan is deeply respectful as always, he doesn’t explore gender in a derogatory manner.

This narrative is familiar ground for Sheridan but as the film progresses in solving this mystery, we learn about some of the other area’s inhabitants and characters who battle their own demons. The town in ‘Wind River’ is just as important a character as its living ones, its personification of it being a predator to the Indian prey is deeply elegiac. One of the very first scenes we see in the film is a deeply haunting and mournful shot of a herd of sheep being stalked by wolves. This is an environment where one lives to survive or be killed.

‘Wind River’ is another cracker by Sheridan who ably steps up to the task of directing as well as writing. Like his previous projects, it is very poetic in parts and deeply haunting and melancholic and his script intelligently written with memorable lines. The unpredictable outbursts violence are extremely raw and brutal, portraying the utter nastiness that this conflict between cultures has resorted to.

There are clear juxtapositions between the cold, harsh lanscape surrounding this civilization and the warmth of the inside. There is a constant presence of the cold wind breathing on the necks of these characters which makes ‘Wind River’ deeply sensory for its audiences. At times, I got tingles from the cold, piercing feeling of walking barefoot on snow – Sheridan really has succeeded in crafting a believable world for this narrative to inhabit within.

The film is also surprisingly important as it has a lot to say on Native Americans and their mistreatment – a title card at the very end of the film really hits this story home. This mistreatment of Native Americans on a macro scale ties very cleverly into the theme of family on a micro one. We briefly meet the parents of this murdered teenager, the father played by Gil Birmingham who puts in a sombre and reflective performance in the two very powerful scenes in the film that he features in. Even more brief is our insight into how her mother has taken this shocking news. But it is not just Natalie’s death that has caused the Hanson family to descend into turmoil, it is the detachment of their son, Chip, to drugs – again the film is insightfully investigative into how the landscape and town can split our characters up from each other and leave them only clinging on for survival.

Both Jeremy Renner’s and Elizabeth Olsen’s performances as Lambert and Banner are also wonderfully intertwined into the film. Renner, in a career best performance, gives a more subtle and quiet performance as Lambert’s tracker who also secretly battles his own demons. Elizabeth Olsen also excels as the FBI Agent who struggles to get a grip of controlling the volatile situation, a character who is both naive and out of her depth, but academically intelligent and has her heart in the right place.

Nick Cave and Warren Ellis’ score is particularly atmospheric and moody and really lends itself well to the film’s harsh and brutal lanscape. Cave and Ellis continue to prove why they are one of the finest composing duo’s of recent memory and also did an outstanding job on ‘Hell or High Water’ last year. They revisit some of the familiar themes implored in that film and their other body of work and Cave lends his soothing voice in multiple moments to further describe the barren and feral environment these characters are living in.

Although overall melancholic and sorrowful, ‘Wind River’ faulters in its third act. The big reveal is quite jarring in its pacing and disrupts the pace of the film. Its conclusion feels a little too neat and the film could have really propelled from another twist – as far as murder mysteries go, this one is fairly simplistic for its audience to solve. It also doesn’t quite boast the same amount of energy ‘Sicario’ or ‘Hell or High Water’ had with their breakneck pace and tension. ‘Wind River’ is a more sensory film about discovery and cruelty and the theme of isolation.

‘Wind River’ is definitely a film worthy of your time and attention and Sheridan manages to deliver another satisfying rural Western that is very thematic. It boasts some terrific performances and an intelligent script that has a lot to say on its subject matter. Although on first viewing ‘Wind River’ doesn’t feel quite as strong as Sheridan’s other work, it’s still an excellent piece of work and hopefully a film that will further improve the more it is unpacked and rewatched.