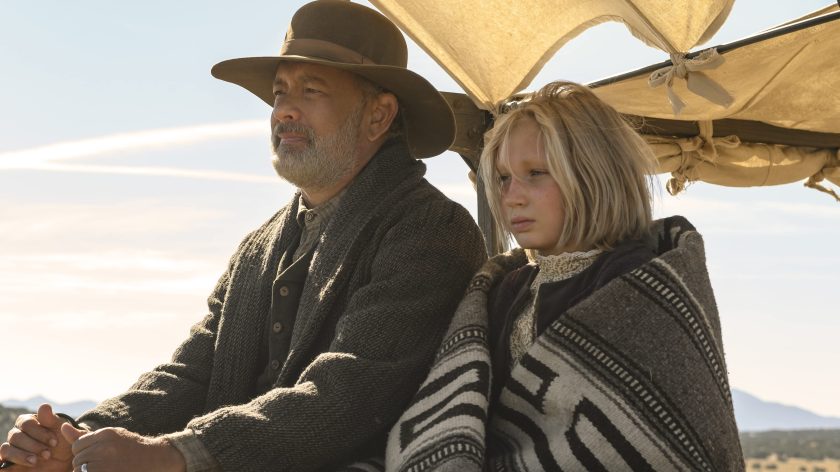 News of the World represents a different filmic venture for director Paul Greengrass, most notable for the Jason Bourne series and his dramatisations of original events with films such as United 93 and Captain Phillips. This is a quiet, contemplative Western that save for one stake-out on a hill mid-way through, is bereft of action. It couldn’t be more far removed from the rest of his filmography, also foregoing his signature twitchy handheld camera and docu-drama aesthetic.

Tom Hanks plays Captain Jefferson Kyle Kidd, a Confederate veteran who makes a living travelling from town to town in 1870’s America, reading the news to local populations for ten pence per person. Captain Kidd’s relatively simple life is overturned when he encounters an overturned cart where twice orphaned Johanna (Helena Zengel) is discovered after she runs past him terrified. Johanna has quite a back story – she came from a German farming community who were attacked by a Kiowa tribe, where they then made her part of her community and now the Kiowa’s have been cleared out by the American army. After trying to deliver her to the relevant authorities who can take her to safety, Kidd decides to take the task up himself to reunite her with her closest family, an aunt and uncle who live on a farm on the far side of the state. Along the way, he stops to read the news to various communities to finance the journey, one community in particular drawing parallels with modern day politics in how its dictator gives Kidd his approved news to read and he has an army to ‘cleanse’ the county of any outsiders.

Both performances by Tom Hanks and Helena Zengel are exemplary. Despite Hanks’ vast variety of roles, this his first official Western (although arguably, Woody in Toy Story is close!). The young Helena Zengel impresses and the two establish a convincing rapport. When the film reaches its action setpiece mid-way through, Greengrass has already more than allowed audiences to have an emotional investment in the duo Dariusz Wolski’s cinematography is terrific, with sweeping panoramic vistas with a gallery quality that draws parallels with The Searchers, one shot in particular harkens back to its ending.

However, News of the World is only good. The Western has had a resurgence in recent years with some outstanding additions to the genre such as The Hateful Eight, Bone Tomahawk and Hell Or High Water. As there have been so many examples of strong work that perhaps have established an unreasonably high bar, it’s disappointing that News of the World doesn’t come close. It’s perfectly acceptable that Greengrass’ film sticks to convention but there isn’t a great deal of substance here both in its narrative or tonal quality. Even James Newton Howard’s try-hard score doesn’t really stick.

Ultimately, News of the World is a modest and well-intentioned Western with strong performances but it doesn’t try to reinvent or progress the genre, is narratively thin and fails to leave a lasting impression.