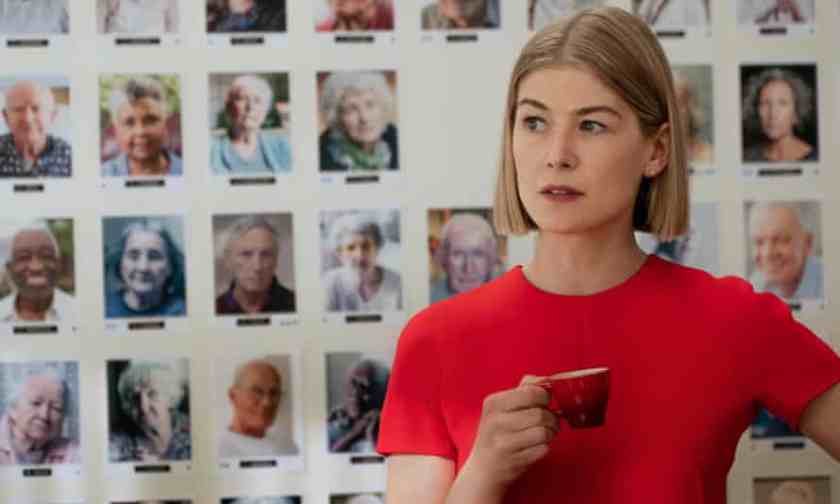 I Care A Lot is a gripping and wild black comedy-thriller that keeps its audience on its toes throughout. Rosamund Pike plays Marla Grayson, a morally bankrupt but cool-as-a-cucumber con artist who preys and scams on the older generation by becoming their ‘legal guardian’ and sending them to a care home, whilst she profits from selling their property and assets. Marla is assisted by her lover and business partner, Fran (Eiza Gonzalez) who has an equal disregard for the ethics of her actions. After targeting what is defined early on in the film as a ‘cherry’ – a single lady called Jennifer Paterson (Dianne Wiest) who has no family but vast amounts of wealth, on paper this should be the perfect opportunity for them to profit. Jennifer is quickly whisked away into a care home, which is not too dissimilar to a prison in its construction. Marla faces a visit from a stash-carrying lawyer who warns her that Jennifer is ‘the worst mistake you will ever make’, a gripping game of cat-and-mouse ensues with elements of revenge, a no-nonsense, smoothie-drinking villain who is very much Marla’s match and ties to the Russian mafia.

Directed by J. Blakeson, I Care A Lot is directed with an improved and impressive assurance for only the directors third feature. Blakeson crafts some intense sequences which are really well developed in their Hitchockian construction. The performances are fantastic across the board. This is familiar territory for Rosamund Pike, Marla a character cut from the same cloth as her Oscar-nominated performance in Gone Girl. Eiza González is just as strong as her partner in crime. Peter Dinklage is clearly having fun as the villain and Dianne Wiest deftly manages to balance the hopelessness but hidden intelligence of Jennifer. Isaiah Whitlock Jr. has a small but humorous role as a Judge who is very much under the spell of Marla.

The film from start to finish is really excellent. Perhaps some of the twists the film takes in its third act aren’t quite as fresh as the beginning and it begins to move away from its smart commentary in the first two acts on the elderly generation. The notion that this could happen to you when you are older is genuinely frightening and really doesn’t feel that far removed from reality. I’m also not sure on the film’s ending and I felt that there was a clear end point which would have been more enigmatic for the audience, rather than there being an actual conclusion. The film features an interesting synth score which contrasts with the events unfolding on-screen but sometimes aggressively doesn’t fit.

Ultimately, I Care A Lot is a wild ride throughout and is thoroughly entertaining. This is not only J. Blakeson’s best work in his career, this is also one of the best films of the year so far.

One thought on “I Care A Lot (Review)”