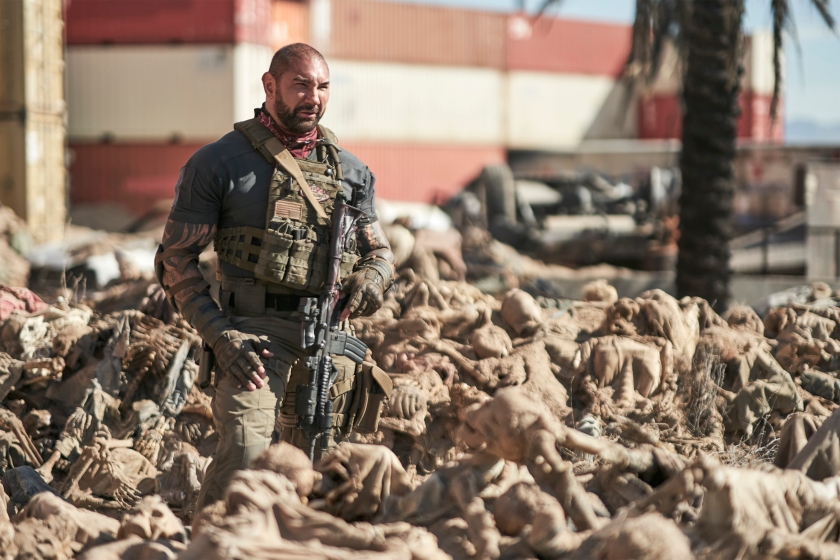 Army of the Dead, visionary director Zack Snyder’s first film post-DC, is a total blast from start to finish. Snyder is no stranger to the zombie thriller genre as his first film was Dawn of the Dead, a very solid remake of George A. Romero’s original. This is not connected to Dawn but does take some inspiration from other Romero works. Army of the Dead follows a group of ragtag soldiers, led by Dave Bautista’s Scott Ward, into the quarantine zone of Las Vegas to retrieve $200 million dollars from a casino vault. The catch is that Las Vegas is swarming with zombies and the government are planning on blowing the city up to eradicate the zombie population. There are two different types of zombies – ‘Alphas’ and ‘Shamblers’. ‘Alphas’ are a more intelligent breed of zombie whereas ‘Shamblers’ are your run-of-the-mill classic zombies.

Snyder crafts a fascinating world here and there is some interesting political sub-text. Ethical questions are posed that draw parallels to the current American political climate and treatment of migrants. We are introduced to a diverse set of characters that are going to carry out the heist operation. Whilst the character tropes are fairly conventional and some characters aren’t really fleshed out, this is a zombie film after all and it’s inevitable that some of the cast are only introduced to die.

Dave Bautista makes for an excellent lead as an ex-mercenary who is now a chef, who is pulled back into action when Hiroyuki Sanada’s rather shady billionaire show up at his work to entice him into the job. Of the sizeable team, Ana de la Regruera, Nora Arnezeder and Matthias Schweighöfer make the best impression. Regruera plays a friend of Scott who is a mechanic, who helps to put a team together and Arnezeder plays Lily, a Frenchwoman who acts as the group’s guide into Las Vegas and who has learnt to understand the mentality of the zombies. Schweighöfer plays Ludwig Dieter, a German safecracker, who gets some of the film’s best lines but also has a lot of heart. A prequel, Army of Thieves, is in production that is to be a follow-up to the film which will follow his character and will be directed by the actor.

The film is a visual treat and Snyder, who acts his own cinematographer for the first time, does a commendable job in building a convincing post-apolocalyptic world that doesn’t feel too far removed from how it is currently. The film is bursting with colour and Snyder leans into the creative kills and gore that earn the film its 18-rating with joyful glee, the opening credits to the film being particularly memorable. He balances this with some suitably dour darker lit sequences that highlight the origins of the Alphas and their leader Zeus, who is particularly well developed as a villain, and fits in perfectly with Snyder’s horror roots.

Army of the Dead is further proof that Snyder works best when he is not restrained by a film studio. We saw proof of that earlier in the year with his director’s cut of Justice League and this unrestrained and giddy experience further cements that he is a talented director. Snyder has received rightly deserved some flack in the past where his stories and characters aren’t always suitably developed and it would be fair to say that as a filmmaker, he struggles to stick to convention. But Army of the Dead isn’t overlong or self-indulgent – this is the perfect length for the story that Snyder has crafted and the film takes its time to create a strong verisimilitude. I cannot wait to see where this material is taken next in a prequel and the film certainly leaves an enticing door open for a sequel. Army of the Dead is one of the best films of the year.