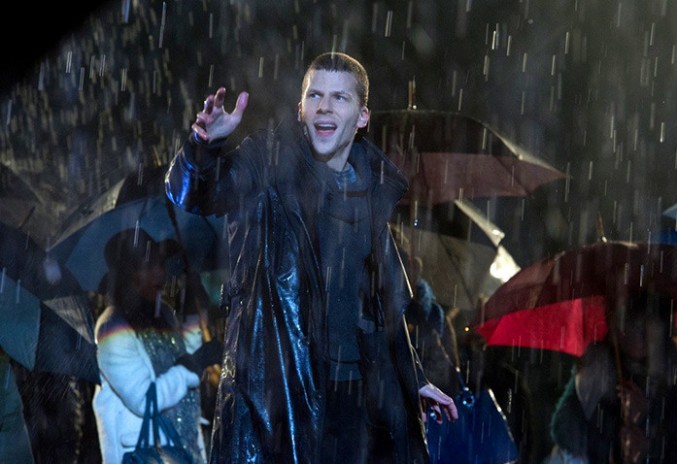 ‘Now You See Me’ was a surprise hit in 2013 and ended up being very profitable grossing just over $350 million worldwide on a $75 million budget. Although reviews were decidedly mixed, audiences generally seemed to like it so enough for this film to warrant a sequel. I had some with the first film – it’s a light-hearted, silly but entertaining caper however it’s very haphazardly directed and isn’t particularly intelligent. ‘Now You See Me 2’ sees the original cast return with the exception of Melanie Laurent and Isla Fisher, the latter due to pregnancy and she is now replaced by a new female character played by Lizzy Caplan. Now alarm bells should have started ringing  at Lionsgate / Summit in terms of the crew – when you think of a good director to carry on a franchise that wasn’t particularly great to start with who could possibly improve on the first film and fix its problems, how on earth does Jon M. Chu come into the mix?! Chu is behind films such as ‘GI Joe: Retaliation’ and ‘Jem and the Holograms’ – both very negatively received and he is also behind a lot of the ‘Step Up’ films which perhaps could be the reason why he was employed based on the strength of their choreography but it is still a baffling choice.

‘Now You See Me 2’ has exactly the same problems as the first film but even more so –  its plot is preposterous and the film finds itself in a constant muddle as it overcomplicates itself. There are zero stakes for the protagonists as the viewer knows that everything will work out well for them in the end. Chu’s direction is as expected very sloppy and Peter Deming’s camera work is too choppy and grainy. The toothless action sequences are particularly badly handled and it’s very hard to make any sense of what is being portrayed on-screen. However this is not all to say that ‘Now You See Me 2’ is a ‘bad’ film – although completely unmemorable, there are a couple of sequences that are interesting and allow the film to temporarily come together and there are a couple of good performances from its cast.

The biggest problem with the film is undoubtedly its incomprehensible story that is so concerned with outdoing the first film’s story that the film falls head over heels and defies belief. This is particularly true with the film’s climax which is extremely stupid and uninspired – you’ll know it when you see it. For all the first film’s flaws, there was still a degree of ‘magic’ involved even though it turned into more of a Louis Leterrier action movie as it went along but here, any magic that the first film managed to conjure is totally bereft here. Unfortunately this is the result when studio executives get greedy and try to replicate the success of the first film.

In terms of the cast, the film bears a strong cast just as the first one did and this time, the Horseman are pitted against Walter Mabry, portrayed by Daniel Radcliffe, who is the technology tycoon / illegitimate son of Arthur Tressler who Michael Caine plays. Radcliffe gives it his all and doesn’t do a bad job at all in a villain role. Jesse Eisenberg, Dave Franco and Woody Harrelson return as the Horseman and all are great again although without going into spoiler territory, Harrelson’s character is badly meddled with in the storytelling department – you’ll know it when you see it. Lizzy Caplan unfortunately isn’t as talented an actress as Isla Fisher is and although there are some interesting feminist undertones the film attempts to develop, Caplan’s character resorts to a shouty and annoying one. Michael Caine, Morgan Freeman and Mark Ruffalo, three exceptionally talented actors are always endlessly watchable but a real surprise in this film is Henry Lloyd-Hughes who has more of a cameo here does a great job with the material that he has been given.

Unfortunately, ‘Now You See Me 2’ is a film this Summer that is one to skip as it has exactly the same problems as is the original only even more so. These films are also part of a small genre where they are dwarfed by greats such as Christopher Nolan’s, ‘The Prestige’ and Neil Burger’s, ‘The Illusionist’ – two very interesting films, Nolan’s being a masterpiece that are much more subtle and more intelligent in their execution. How these films attempt to make their own mark is by being more of an action-caper film but both films, the sequel more so are both lazily handled and the creative talent behind the camera for both films leaves more to be desired. But ultimately, ‘Now You See Me 2’ is a very lazy film that has a preposterous storyline that although at the time may seem entertaining in parts is completely forgettable and it is time for this series to be left alone. Let’s face it, it was never very good in the first place.