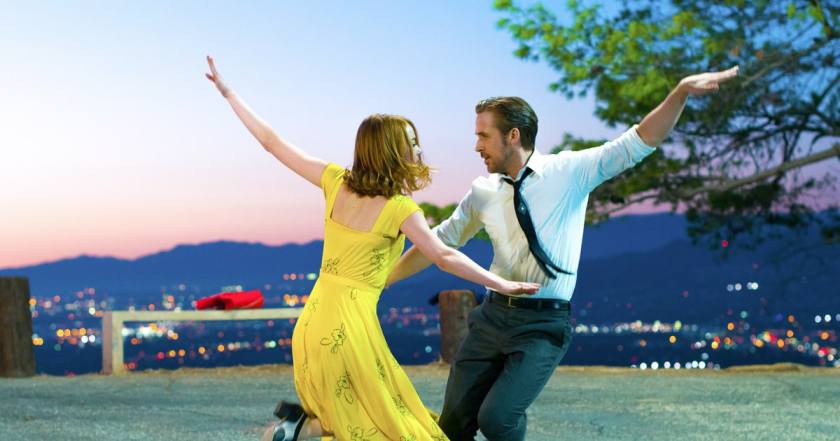 After winning three Oscar’s for his 2015 film, ‘Whiplash’,my favourite film of that year, writer/director Damien Chazelle is back with romantic musical ‘La La Land’ that so far took the Golden Globes by storm winning all seven of its awards it was nominated for and will undoubtedly go onto to receive many Oscar nominations. I’m a big fan of Chazelle and I think he is one of the most exciting people working in the film industry, always writing memorable scripts with empathetic, three-dimensional characters with assured direction. The reason why I loved ‘Whiplash’ was because it managed to synthesise these traits and featured some fantastic performances by both Miles Teller and J. K. Simmons, the latter winning an Oscar for his work. I strongly believe that ‘Whiplash’ is in fact a musical in itself – the music played a pivotal role in the film and its subject matter and acted as its own entity. Although he didn’t direct the film, I was enthralled with Chazelle’s work on the screenplay for ‘10 Cloverfield Lane‘, again managing to be gripping and full of twists and turns. I really do admire this guy and was really pleased to see that his latest film is getting lots of attention. ‘La La Land’ looks to be in the same vein as ‘Whiplash’ in its appreciation of music and it reunites both Ryan Gosling and Emma Stone as two individuals who cross paths and try to pursue their dreams, Gosling’s character, Sebastian wants to open up a Jazz club to appreciate the dying art and Stone’s character, Mia who wants to be a successful actress. The film has received rave reviews from both critics and audiences alike, many citing the film as a “love letter” to classic Hollywood musicals and it very much looks the way that this film is going to be the top contender at the upcoming Academy Awards.

It is with heavy heart that I found ‘La La Land’ to be an incredibly disappointing film that is totally undeserving of all the praise it is getting. I really wanted to like this film and I kept trying to make excuses for Chazelle but there’s just too many mis-steps to ignore and the film feels very disjointed in its pacing. The performances are admirable and Gosling and Stone carry the film well but by no means are they awards-worthy and the script in particular, which is normally Chazelle’s main attribute is dismally lacking and doesn’t have any direction to it. The whole plot of the film is by extension, confused and the film doesn’t know what it wants to be and the many elements of the narrative just aggressively don’t come together. Did I miss something in this film? Did I watch a different film to everyone else, not the one that has made such an impression on both critics and audiences and has attracted sterling reviews?

The performances in the film are admirable and Ryan Gosling and Emma Stone do some nice work and have good chemistry together, Gosling in particular carrying on a very good year in terms of his performances as he also impressed in ‘The Big Short‘ and ‘The Nice Guys’. However it is only down to these actors and their willingness and success in being able to portray these characters as  I just couldn’t empathise with them. All they seemed to be concerned with the possibility of a profitable career which they coveted which I think is actually quite a sickly message. I was completely uninvolved with their characters as they try to reach heights that are near-enough unattainable for the amount of work they put in to getting there. Mia is a particularly manipulative character who uses Sebastian as a pawn to get what she wants. Of the supporting cast, it is John Legend and J. K. Simmons, the latter unsurprisingly who fare the best. Simmons as usual is reliable in a small role and John Legend gives a rather subtle and nuanced performance as Keith, a classmate of Sebastian’s who forms a jazz band which allows Sebastian a means of getting onto the financial ladder.

I genuinely don’t understand how ‘La La Land’ is getting recognition for its screenplay. Not only did it manage to get nominated, it actually won the Golden Globe for it and is currently nominated for a BAFTA and most likely an Oscar too. Chazelle’s screenplay lacks any form of subtlety whatsoever and lacks any form of wit or imagination. I found the screenplay to be stodgy, minimalistic and not intelligent in the slightest yet somehow it has managed to appeal to other viewers which genuinely baffles me. How is this above some outstanding screenplays that have been nominated this year like ‘Hell or High Water’, ‘Manchester By The Sea‘ or ‘Nocturnal Animals‘?

Being a musical, this is one area where ‘La La Land’ was expected to flourish and Justin Hurwitz, who reunites with Chazelle, does some nice work here and the musical numbers are good, even fairly memorable in a few places. Bizarrely, the film doesn’t have that many big numbers and uses its musical numbers and extravagant stage pieces sparingly instead choosing to focus on the unfocussed narrative. The songs themselves are staged quite well and many of the iconic moments in the marketing for this moment are where the songs feature which Linus Sandgren does a great job capturing cinematographically but the rest of the film is oddly subdued and devoid of visual flair which amounts to long stretches of nothing all that much happening. Where the film does manage to partly redeem itself and where I suspect the film has managed to be received positively is in its ending in which there is a sequence that is fantastically crafted and offers a new spin on the film that has come beforehand.

‘La La Land’ is possibly the biggest disappointment in recent memory and the most undeserving film of significant Awards attention certainly of this decade but potentially of the century as well. I don’t understand how this film has managed to appeal to such a wide range of audiences and critics. For me, I was emotionally uninvolved, not invested with these characters in the slightest and a constant cloud of disappointment and mediocrity hung over this film. As mentioned, before I totally lost it with this film I did try and make excuses for Chazelle and hoped the film would redeem itself which it never really does and is just a big, empty nothing. I can only hope the film manages to get snubbed in the Academy Awards but I doubt that will happen. Ok, perhaps this film could be one small misstep in Chazelle’s career but if this is going to be celebrated and showered with Awards, I can only fear that Chazelle is going to make more and more films in this vein and not the taut, witty, intelligent pieces of work he has done beforehand – the bigger picture is at stake! How has this film managed to do as well as it has? I honestly don’t think I have seen the same film as everyone else seems to have done.