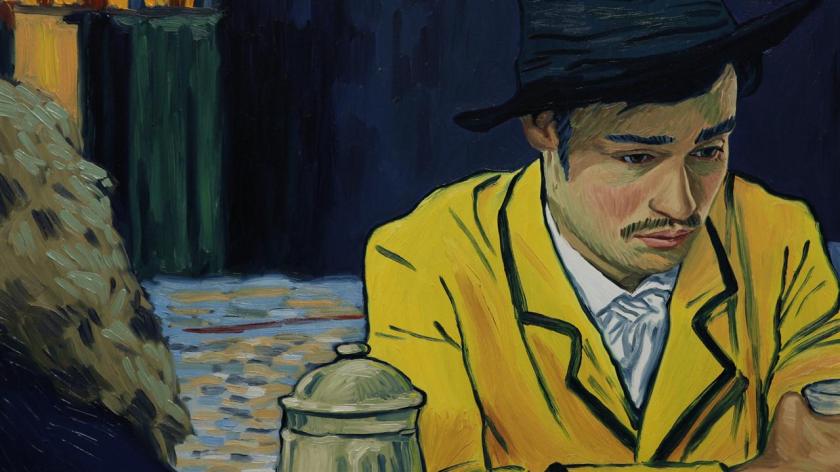 Loving Vincent is the first of its kind – a fully painted animated feature film, about the life of famous painter, Vincent Van Gogh. Every frame (approximately 65,000 of them in the film) has been handpainted on oil canvas by a team of 115 artists, using the same technique as Van Gogh’s art. It’s certainly a bold experiment and a wholly original concept, furthering the parameters of the creative process.

The film follows protagonist, Armand Roulin (Douglas Booth), the son of a Postman (Chris O’Dowd) who delivered and distributed Van Gogh’s famous letters. Ironically, Armand is tasked to deliver Vincent’s final letter to his brother, Theo who famously corresponded via this format. Armand’s journey takes him to Auvers-sur-Oise, a rural town just outside of Paris where Van Gogh had spent his final days.

I must confess I didn’t really know all that much about Van Gogh other than the obvious going in to the film and was unsure if this film was going to be a big gimmick or if it could balance both the technical aspects whilst also working as a film in its own right.

Loving Vincent is quite extraordinary – it is a haunting, elegiac and mournful account of this late artist’s life and the struggles he faced. The film is profoundly humane in the way it portrays him and at times, inhumane in his treatment by other characters in the film. Once Armand arrives in Auvers, the film transforms into a detective-thriller as Armand learns from the citizens what kind of character the artist was and the particulars leading to his suicide. The film also works as a morality tale and has knowing odes to Citizen Kane with the notion of people’s experiences and perceptions of others. There are many scenes that are just perfectly judged and on a technical level, the paintings are spellbinding. The ever-dependable Clint Mansell’s score is also worthy of commendation – it is the glue that holds this film together and features many memorable cues and themes.

The film was originally meant to be live-action before the switch to animation and I think it is to the film’s benefit it originally tried to pursue itself in live-action. The costume design and performances by the film’s cast are superb and in the credits, we get to see what the actors were meant to originally look like and the way this has been realised through the paintings is just magnificent. Douglas Booth, who also appeared earlier last month in The Limehouse Golem, I think gives a career-best performance. He is totally committed to the character and none of Booth’s mannerisms are lost in the paintings. Eleanor Tomlinson and Aidan Turner also standout as two figures of the town as does Jerome Flynn in a pivotal role.

If there’s a problem with the film, the script occasionally feels rather mechanical  and doesn’t particularly feel realistic in terms of what characters say. It’s a minor problem that is not a detriment to the overall film and perhaps another edit would have ironed out this problem.

Loving Vincent is pretty much flawless in all other respects and it is generally a wonderful experience to have. It’s a film that feels so lovingly put together and well-judged and the ghost of Vincent Van Gogh looms over the entire film. We’ll never know exactly what happened but the film offers many plausible opinions but it always has the utmost respect for this artist. Loving Vincent is one of the very best films of the year and has made up for a generally middling Summer.